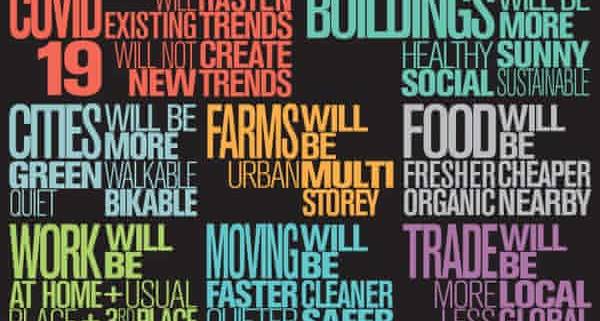 City centres are likely to see fewer cars in future, but that would have happened eventually without Covid-19

Predicting the future of cities is risky, especially if one heeds the words of the American baseball legend, Yogi Berra, that “the future ain’t what it used to be”.

In the period since the start of the pandemic it might seem as if everything is different, but in the long term, I would suggest that rather than changing anything, it has merely hastened and magnified trends that were already apparent before the virus

The history of civilisation is the history of cities and civic spaces – the words are intertwined. Cities are the future, statistically more so today than ever before. In 1920, New York and London were the largest cities in the world. Today they are not even in the top 10 – overtaken by a superleague of mega-cities, mostly in continental Asia. Cities are in a constant state of evolution, forever changed by the technology of their time.

The Great Fire of London in 1666 resulted in the building codes that created the Georgian city of fireproof brick construction. The cholera epidemic in the mid-19th century stopped the Thames being an open sewer, leading to a system of modern sanitation and the Thames Embankment. At the end of that century, mobility was horse-drawn and the city was mired in layers of horse dung, creating stench and disease. The automobile was the saviour, and cleaned up the roads – before it later became the urban villain. Then tuberculosis was a killer, and encouraged the green park movement as well as the roots of modern architecture, with its emphasis on sunlight and outdoor space. The Great Smog of London in 1952 and its death toll prompted the Clean Air Act in 1956, and the switch from coal to gas.https://97369b4c03b501aebf3b298e8cfab121.safeframe.googlesyndication.com/safeframe/1-0-37/html/container.html?n=0

But every one of those consequences – fireproof buildings, sewage systems, green parks, the automobile – would have happened anyway. The crises of the day hastened and magnified their arrival.

History also tells us that the future is not two-metre distancing. The last major pandemic of 1918-20 created deserted city centres, face masks, lockdowns and quarantines. But it also heralded the social and cultural revolution of the 1920s with newly built gathering spaces: department stores, cinemas and stadiums.

What might be the equivalent hallmarks of our coming age, after Covid-19? We have already witnessed dramatic increases in the mobility of people, goods and information while simultaneously confronting the realities of climate change and carbonisation. We are now seeing trends away from fossil fuel to cleaner electric propulsion, vehicles that can charge by induction, be driverless and “platoon”, nose to tail; a shift against car ownership by the young with an appetite for ride-sharing and on-demand services such as Uber; the rise of scooters and e-bikes and the prospect of drone technology for moving people and goods.

To these trends in mobility, add in new patterns of working. The traditional workplace will survive, and be even more appreciated for its social and creative opportunities. But it will be used far more flexibly, and balanced with time spent operating out of home or a third place – an Alpine eyrie or digital Starbucks in the high street.

The cumulative effect of even just a few of these trends will change the infrastructure of our cities as progressively less space is needed for vehicles. We can already see the effects in central London, with proposals for pavement widening and conversion of traffic lanes to bike lanes; elsewhere, entire streets have been given over to terraces for dining. Radiant heating and cooling will extend the seasonal use of outdoor spaces.Ad

Pedestrianisation is not new to central London – I have memories of crusading for the removal of cars from Horse Guards Parade and the north side of Trafalgar Square – transformations that are long forgotten now. What is new is the rate of change – especially in terms of attitudes of mind to the beautification of the city.

City centres will have the potential to be quieter, cleaner, safer, healthier, more friendly, walkable and bikeable and vitally, if the opportunity is grasped, to be greener.

Over the past decade projects in three continents have shown the way forward. In the US, Boston’s “Big Dig” created a centrepiece 12-hectare (29-acre) site of parks and boulevards by burying an elevated highway in tunnels. In Europe, the Madrid Rio project “disappeared” in a similar way, creating a huge new 10km-long urban park. In Asia, Seoul has created a 40-hectare public recreation space in the city centre, on the site of a stream that was covered over with roads during rapid postwar development. More recently, Paris announced plans for 650km of “post-lockdown” cycleways.

Neighbourhoods have seen a resurgence in appeal with the tag of “the 15-minute city”. The ideal of being able to live, work, sleep, shop, dine, be educated, entertain and be entertained – with all the venues for as many of those activities as possible to be within walking distance of each other. The attraction of neighbourhood living is not new, but it has been given a timely and welcome boost by the pandemic. It is now opportune to build on that through a combination of design interventions and the politics of zoning.

These dense communities have not seen higher infection rates, rather the problem is dense cramped households, whether within cities or suburbs – an issue before the pandemic. Affordable accommodation remains a challenge and is inseparable from the plight of homeless people.https://97369b4c03b501aebf3b298e8cfab121.safeframe.googlesyndication.com/safeframe/1-0-37/html/container.html?n=0

Issues of agriculture could also help transform our cities into even more green enclaves. Urban farming of vegetables, using hydroponics, could deliver fresh food, cheaper and more flavourful, with higher yields and a fraction of the use of precious water – all delivered on the urban doorstep, a new version of the farmers’ market. An obsolete multistorey car park is the ideal urban farm. In the quest for the self-sustaining city, holistic thinking that cuts across traditional bureaucracies is needed (the conversion of waste to energy is a good example). In the move to greater autonomy we need to question the traditional power grid, which, for example, saw 2.5 million Californians without electricity last summer.

In the bigger picture, globalisation has lifted huge segments of humanity out of poverty, but it is not without the dire consequences of localised rust belts. Will the economic challenges of a pandemic lead to fewer and bigger, in the art of survival? The hope is a better balance – shared global action on the big environmental and health issues, and local action in the making, growing and powering of our connected societies.

• Norman Foster is an architect